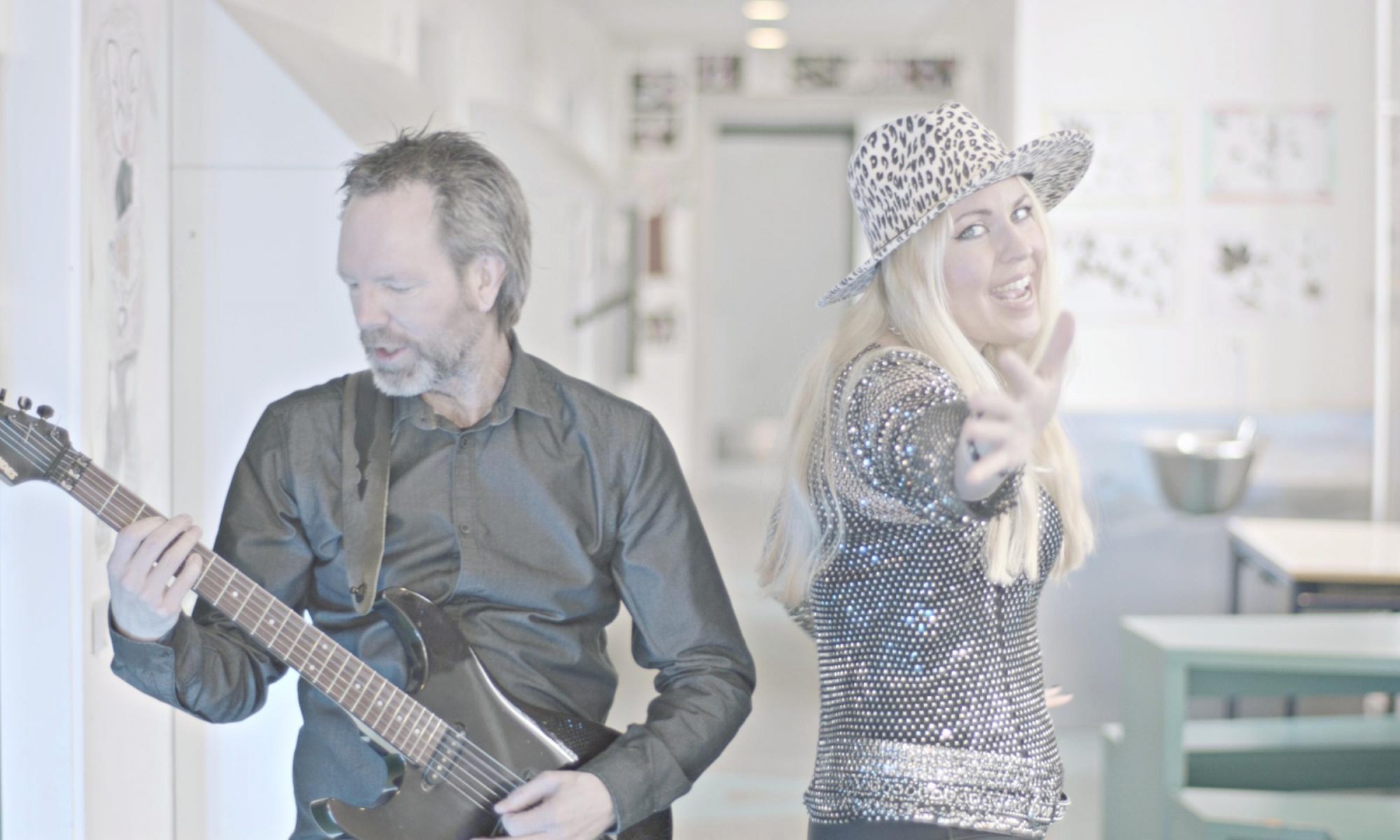 Danish modern rock outfit J.S.P. have released a new single “One In A Million” – https://youtu.be/rUARDeyTw3g

The duo met through their involvement with Danish prog/symfo veterans ROYAL HUNT: Jacob Kjaer (guitar) has been a member of the band from 1993 to 2003 and Alexandra Andersen (vocals) is still providing backing vocals for the band in the studio and on the road.

Kjaer´s masterfully arranged contemporary rock tunes filled with pop sensibilities go hand-in-hand with Alexandra´s melodic yet powerful vocal delivery. Their first single/video “One in a Million” demonstrates the duo´s potential to gain a large following with their unique blend of dynamic rock performance combined with a strong commercial appeal. 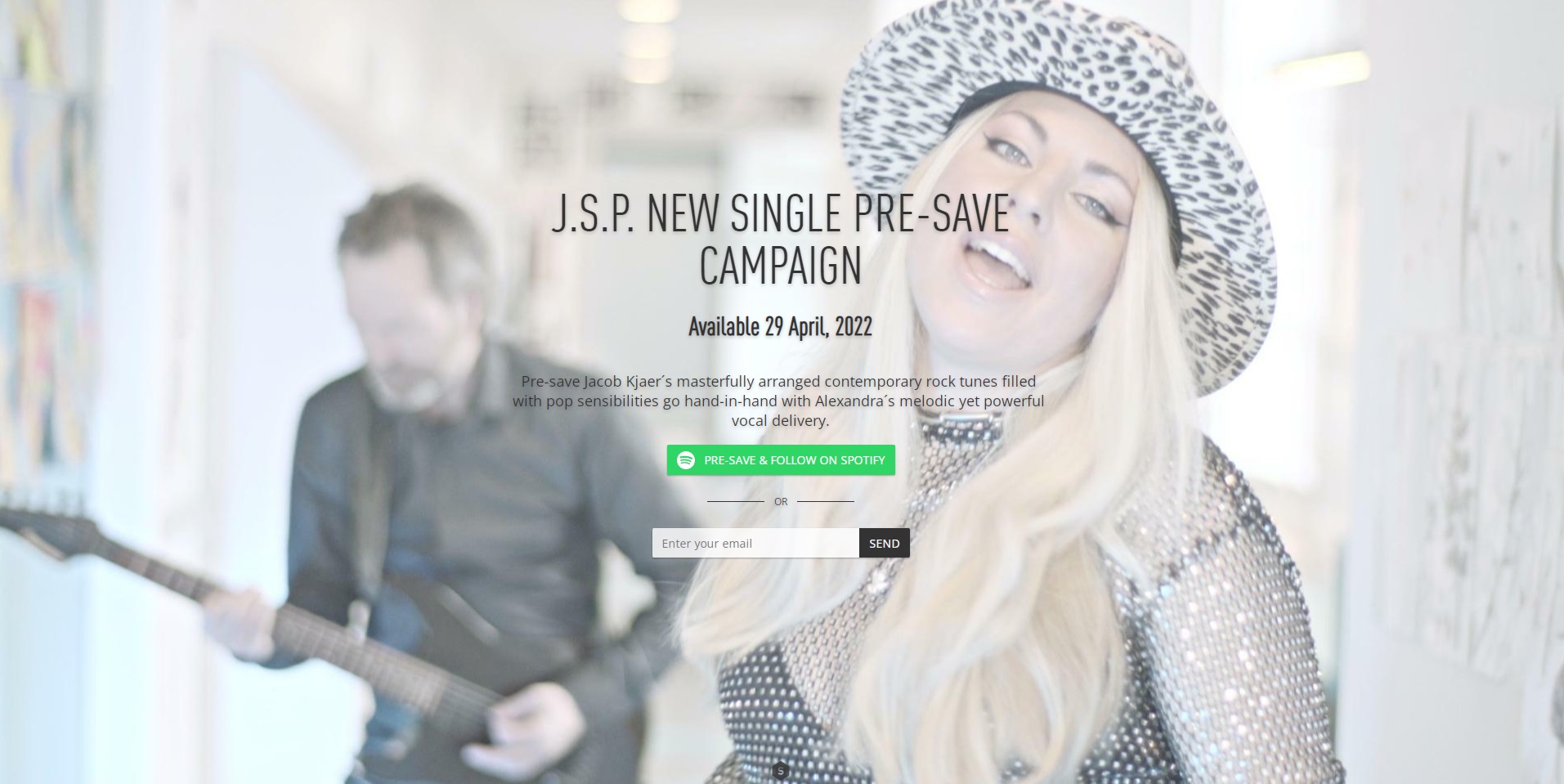 Danish modern rock outfit J.S.P. to release a new single on streaming services and a YouTube video on the 29th of April 2022.

The duo met through their involvement with Danish prog/symfo veterans ROYAL HUNT: Jacob Kjaer (guitar) has been a member of the band from 1993 to 2003 and Alexandra Andersen (vocals) is still providing backing vocals for the band in the studio and on the road.

Kjaer´s masterfully arranged contemporary rock tunes filled with pop sensibilities go hand-in-hand with Alexandra´s melodic yet powerful vocal delivery. Their first single/video “One in a Million” demonstrates the duo´s potential to gain a large following with their unique blend of dynamic rock performance combined with a strong commercial appeal.

ROYAL HUNT announced the beginning of pre-ordering campaign for their new studio album.  A second part of their monumental opus – Dystopia – Part 2. The band invites fans to support the release by pre-ordering the DELUXE EDITION of “Dystopia – Part 2”.  This will give ACCESS to exclusive materials:

The campaign will be run by the bands home label NorthPoint Productions (Denmark) – as usual – “thus we are free to decide when to release, what to release, in which format and with how many extras” – says the Band on their Facebook page.  The “regular” CDs  will  be distributed by Sound Pollution (Sweden) .

Message from the band: “Thinking back to the release date of the “Part 1” back in 2020 makes you realize what a crazy time we all went through just during the last two years: who could have imagined that our “Dystopia” – project would reflect the harsh reality in such detail? And the madness is still ongoing.
In any case, “Dystopia – Part 2” is even more relevant today than ever: we followed the general concept yet filled it up with images of current events in order to make it resonate with every person, everybody living through 2020 to 2022 and watching insanity to unfold in real time”.

André Andersen: “Believe me, the band and it`s respected guests put everything on the line on this record, the amount of hours we all invested in planning and executing this piece is simply mind blowing. Actually, as I´m writing this note, the process is still ongoing: there´re still plenty of tracks to sort out, plenty of new ones to record and hundreds of decisions to make but – already at this stage – it´s hard to ignore the sheer energy/power impact encapsulated in this piece of work”.

Take your seats. Everybody is welcome. Let’s have fun! 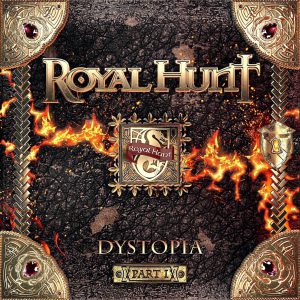 “Dystopia – Part 1” is available on ALL digital platforms (as MP3, FLAC).  A regular CD (jewel case), various deluxe editions / bundles and a double heavy vinyl LP can be found at royalhunt.com/store.

ROYAL HUNT ANNOUNCE THE RE-ISSUE OF THEIR 2005 STUDIO ALBUM “PAPER BLOOD” AS A DOUBLE LP AND AN EXTENDED CD.

ROYAL HUNT announced a re-issued version of their 2005 studio album “Paper Blood” as a double LP and a newly designed digipak. Both are collector’s and limited editions which include bonus tracks as well as extended booklets.

“Hey all! It´s finally summer: the sun is shining, ice cubes becoming a necessity, drinks are getting larger and even (some of) the musical entertainment is slowly but surely coming back… so let us add a little bit to all that goodness: Paper Blood ” is getting a re-release treatment. Yep, that´s right, you can go to our webshop and check it out for yourself – see, summer just got a tiny little bit more exciting!” 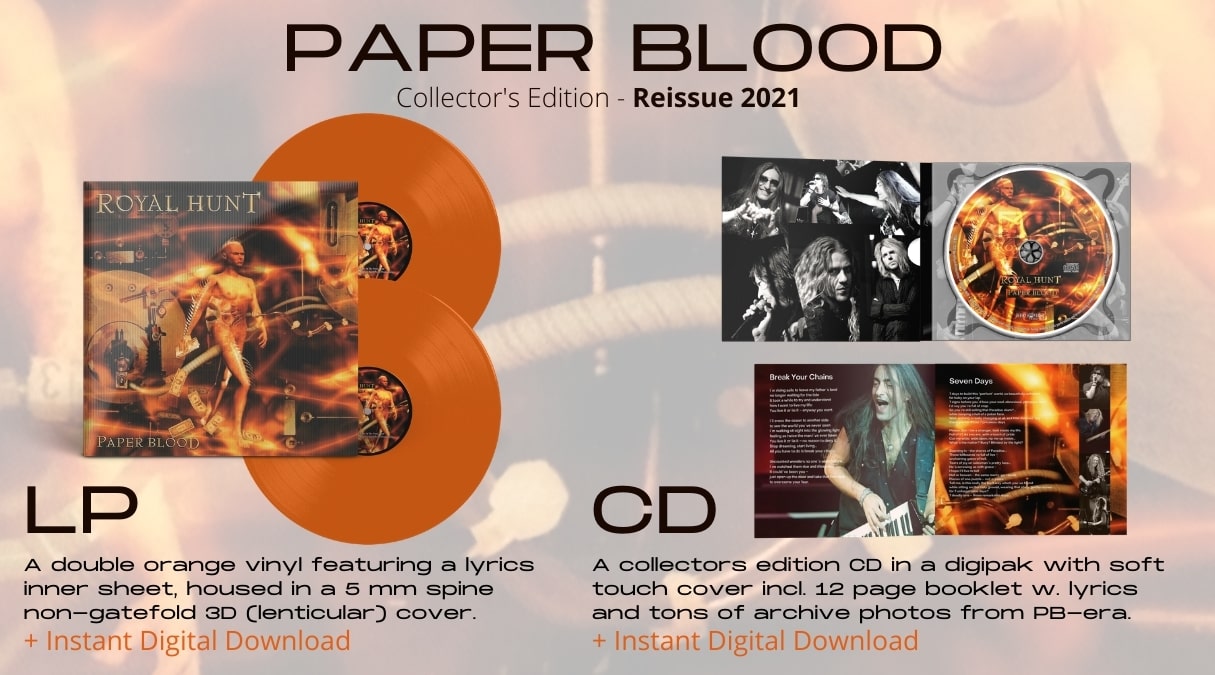 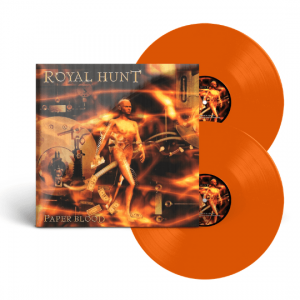 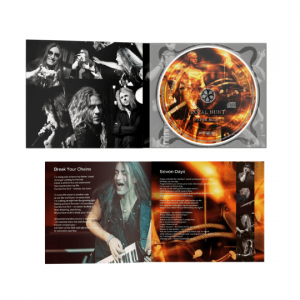 “RH burst out with Paper Blood in 2005- a furiously melodic gem which playfully danced among 80s hard rock, prog metal, and power metal. John West charges through these tracks with an arena-ready voice of the gods and he’s the main reason why there’s an 80s flavor to this, aside from the guitar crunch and attitude. His voice isn’t quite as operatic as most power metal singers and isn’t as clean as most prog metal singers. Instead, he sounds more like a huskier Bon Jovi or any number of AOR vocalists, which isn’t a bad thing. Get it out of your head right now that that’s a bad thing.

Throughout the entire album the keyboards buzz right through your body, severing bone and muscle in the most pleasurable way possible. They’re not brutal, but the tone used is so heavy and astral that it makes you think twice about pissing on them as leading instruments. If you’re going to listen to music like this, you should expect to hear keyboards and like them in healthy quantities. The good thing is that this album loves them, but they’re not flowery and there’s a solid riff base supporting all this. I dare you to sit through any of the three instrumentals without going through the rest of your life with a brain of fried mush.

Lyrically, Paper Blood is about money and how it practically runs through all of our veins, capillaries, and arteries, figuratively speaking. It took me a while to figure out what the hell paper blood is, but when it dawned on me it was marvelous. The social consciousness prog is known for is well on display here, rest assured. Songs such as “Break Your Chains”(which was nominated for a best metal song on a list a couple years ago) and “Never Give Up” also deliver powerful messages of self-actualization and self-empowerment. We sure need that nowadays.

Royal Hunt continue to show they are a unique voice in progressive metal, striking a steady balance between brawn and elegance, retro and modern”. – review by Necrobobsledder / www.metal-archives.com 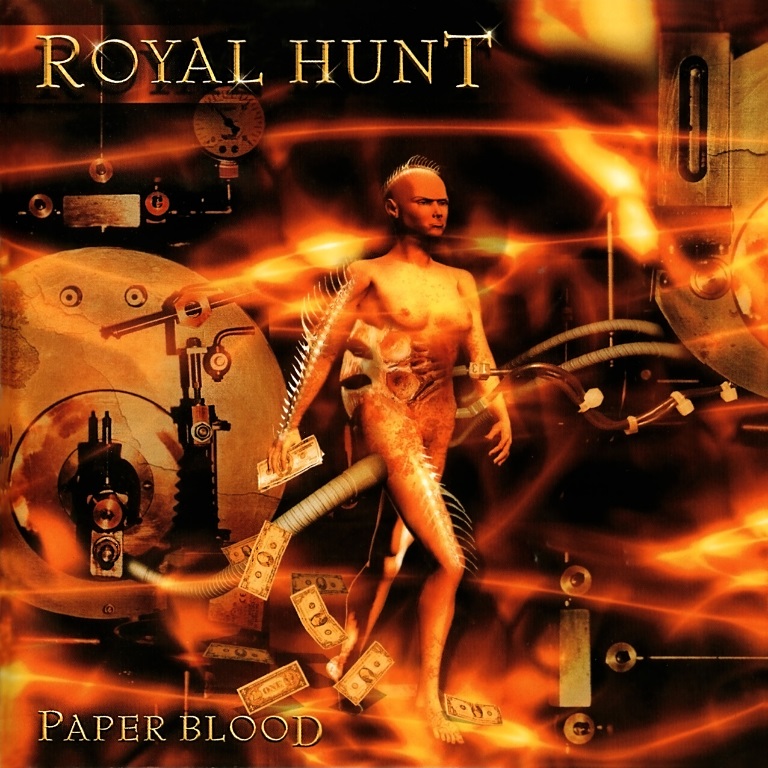 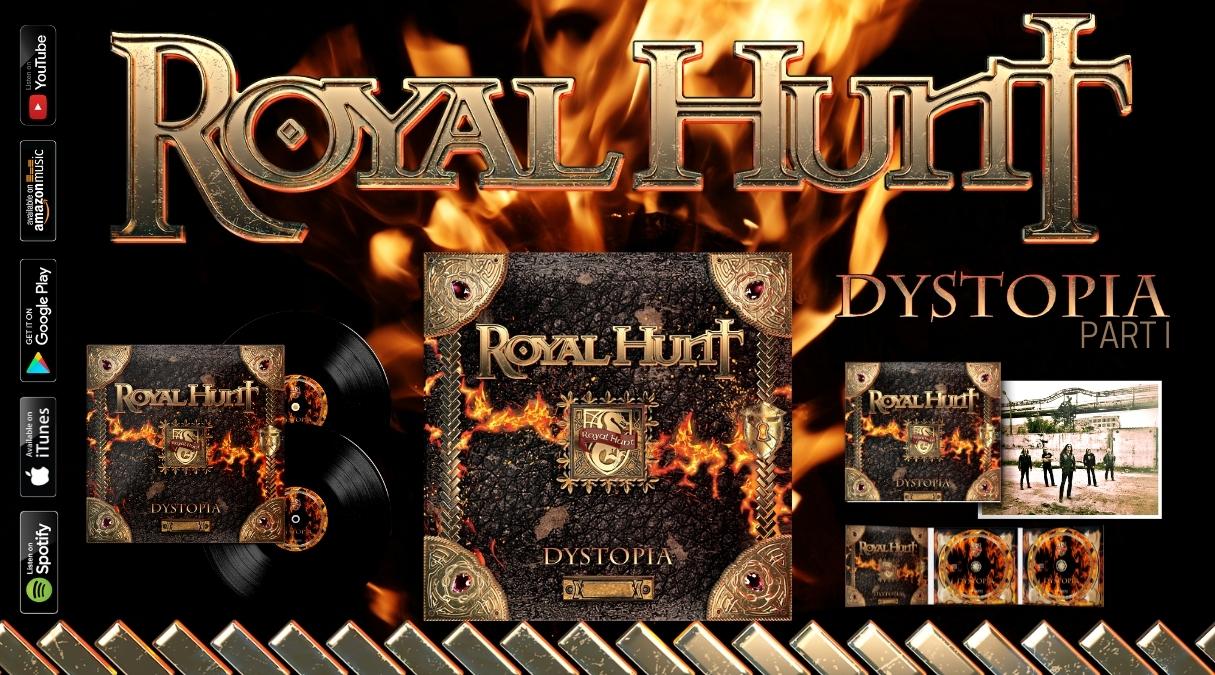 Pre-ordering campaign has started at: royalhunt.com

The addition of some extraordinary guest singers and their outstanding performances combined with vastly extended orchestrations creates a truly conceptual, cinematic feel throughout each and every track. 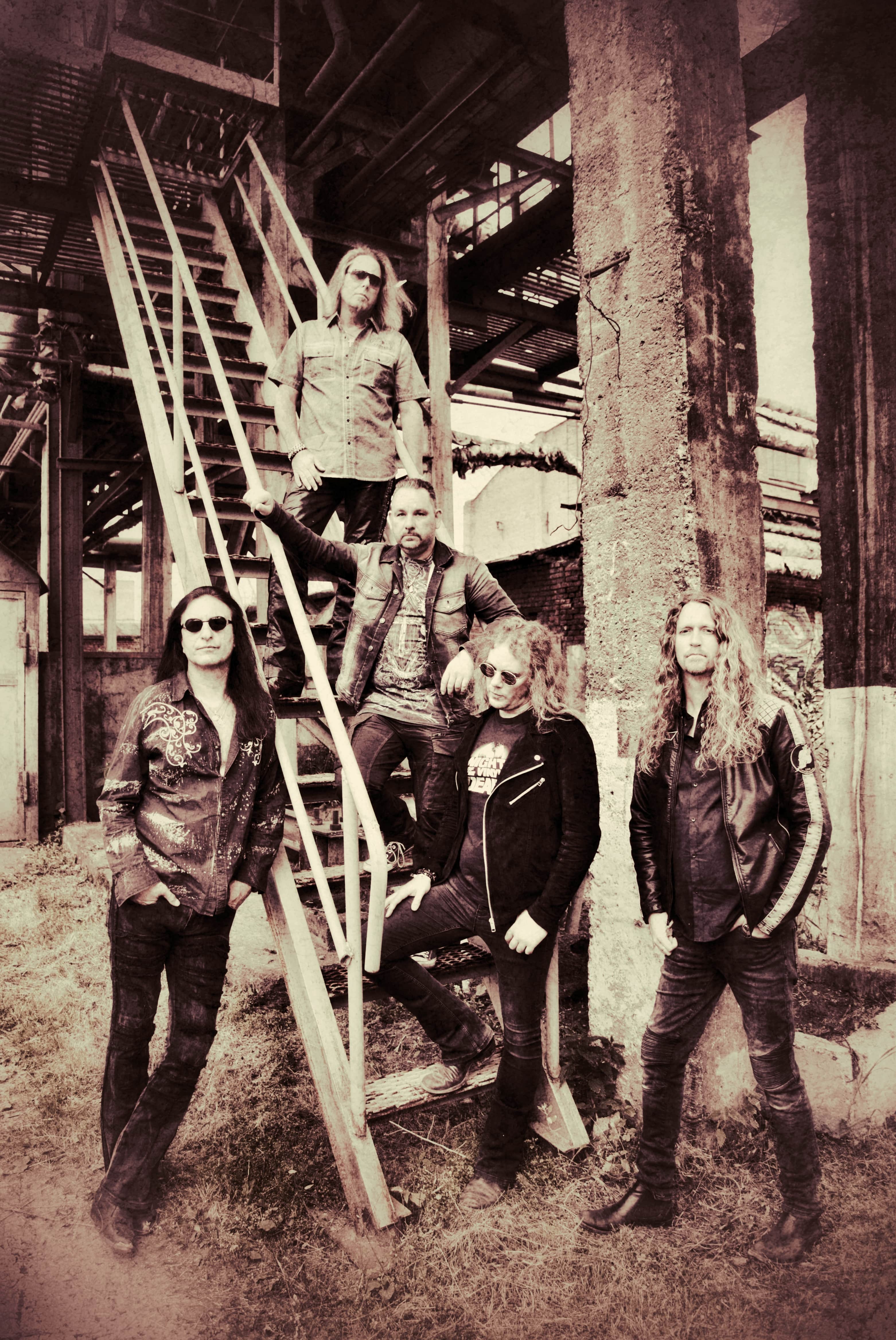 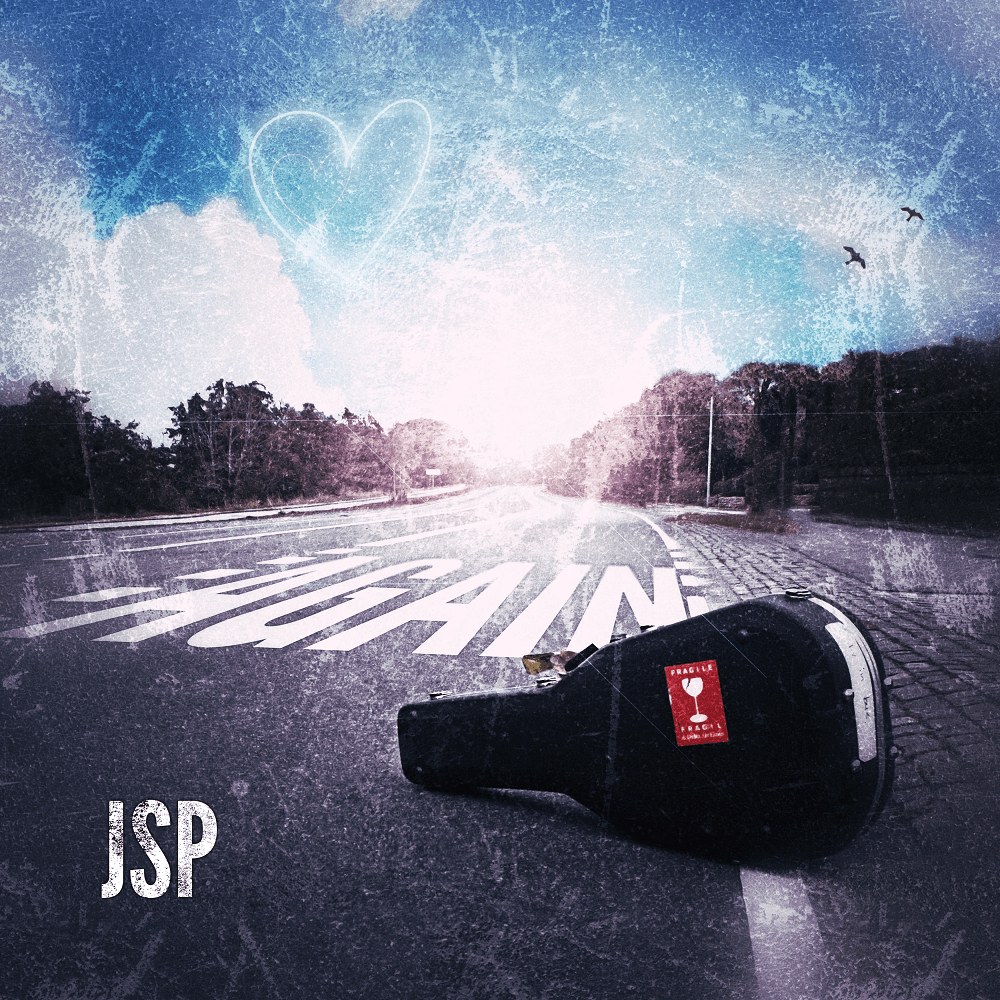 J.S.P. announces digital release of their single “Again”. The song´s been written/produced by Jacob “JK” Kjaer and sung by Sasha Andersen during the lock-down-time and is the first one out of a bunch of tunes the musical duo has been working on lately.

Message from the band: “Hello everyone, as we are going through challenging times, we would like to send some positive vibes to all of you with a simple and uplifting tune – one of the songs that we’ve been working on recently.
Wish we all could shine again, see each other freely again, enjoy traveling and many more – Again! 💗
Best wishes,
Jacob and Sasha / J.S.P. ” 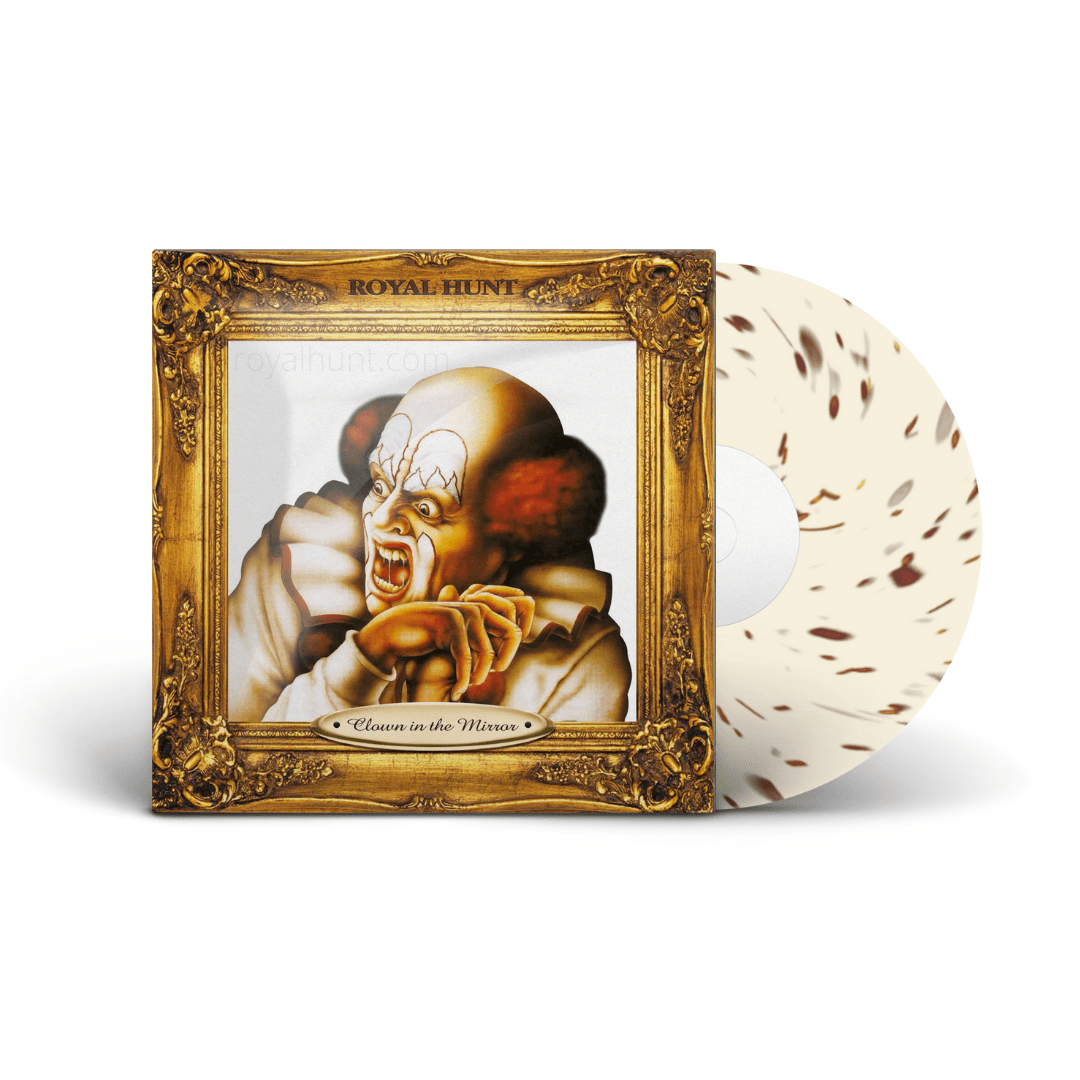 A special Edition of “Clown In The Mirror” LP remastered for vinyl will be released in the end of November 2020 by Night Of The Vinyl Dead (Italy).

The signed LP is now available for pre-order at royalhunt.com.

The band stated: “As everybody´s staying home with a very limited access to any kind of sport activities, we decided to poke a little fun on this whole situation by ordering some personalized team t-shirts… you know, the ones with your name on the back.

The original idea was to make one for each member of the band, but why – as our team reasonably asked – why not include some of our fans to the list?

Sure thing: follow the link below and become a member of our “can´t-get-out-of-the-house-but-at-least-I-got-a-smart-sporty-tshirt” team. Cheers!” 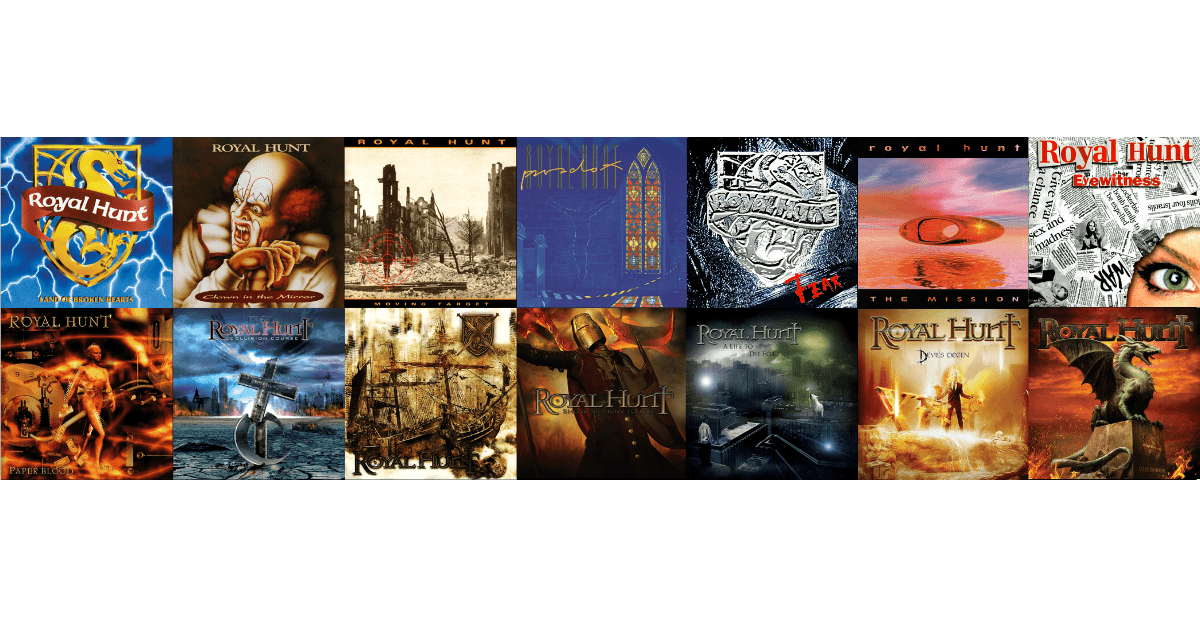 While ROYAL HUNT have isolated themselves in a studio working on the new CONCEPT album – their ENTIRE CATALOGUE has been released on digital download and streaming services like iTunes, Spotify, Amazon music, etc. More information and direct links can be found at royalhunt.com/discography

“…go ahead, have fun during the quarantine (and beyond) – listen and share with friends… Stay safe \m/” – say bandmembers on their Facebook page.

ROYAL HUNT is in a process of recording a new concept album, scheduled for release in 2020 (Japan / SE Asia – KING Records, rest of the world – TBA). As usual, most of the production activities were moved into NorthPoint Studio while mix/mastering facilities will be appointed later. The band hints monumental conceptual offering, which supposed to expand their familiar yet constantly evolving soundscape into previously uncharted territories. With their 15th studio release, ROYAL HUNT’s dead-set to deliver a masterpiece, which should once again rise the bar for modern progressive hard rock genre.

André Andersen: “The next Royal Hunt album is in the works and – while most of it is still in a state of a “sort-of-controlled- chaos” – I´d say it´s probably our biggest production to date… the amount of tracks is simply staggering. Yes, it´s a concept album and yes, there´re some special guests on it and yes – already on this demo stage – this thing sounds huge (even by our standards). So fear not: we´re still around and we´re rocking just as hard – if not harder – as we usually do.”